The research of Paolo Bottarelli since 2009 has been focusing on the dilemma of the existing relationship between an original painting and its copy. His dare is the one to create an image and to translate it in an identical mirrored copy. The attempt to reproduce a primal icon is a challenge to recreate an aura that for definition is essential only to the original. His concern is the irreproducibility of the icon and his incapability to give birth to an identical image. Harking back to quantum entanglement, a real unsolved mystery of physics, the couple of identical and mirror paintings, opposite spin are the two particles entangled in the universe, being them linked even if distant thousands light years. The mirrored images become also a metaphor of the intrinsic dualism of western culture and the portrayal of the dichotomy of the two cerebral hemispheres of human brain. As in a chess match between the artist’s drive to the irrational and his inclination to the rational, Paolo Bottarelli is giving life to a chess board of possibilities, a combination of moves that foster an holistic solution to the detachment.

When it is question of the origin of a human practice, it is well known that mythology rather than history should better be interrogated in order to obtain some crucial elements, able to illuminate not only the first archaic steps of the practice itself, but also the subsequent and even late ones, those which are performed in our contemporary world. Leon Battista Alberti, the first modern theorist of visual arts, recalls the ancient legend of Narcissus (narrated, among others, by Ovid in his Metamorphoses III, 339-510) when he wants to explain the very essence of painting: «I say among my friends that Narcissus who was changed into a flower, according to the poets, was the inventor of panting. Since painting is already the flower of every art, the story of Narcissus is most to the point. What else can you call painting but a similar embracing with art of what is presented on the surface of the water in the fountain?» (On painting, II, 26).
The mirror-image offered by the aquatic surface teaches the visual artist the essential nature of the pictorial image: this image is and at the same time is not the object or subject it reflects. Such an ambiguous status – both from a perceptual and from an ontological point of view – had been already recognized by the ancient Greek thought, and paradigmatically by Plato, who in his Sophist (239d-240c) had explicitly gathered together under one and the same theoretical issue “image” different objects such as «the images in water and in mirrors, and those in paintings, too, and sculptures, and all the other things of the same sort». For all of them, he remarked a strange intertwining of being and not being: images that are “like” the things they represent (the things they are “images-of”), although not being exactly the thing itself. «What we call a likeness – Plato asks –, though not really existing, really does exist?». And he finally argues: «Not-being does seem to have got into some such entanglement with being, and it is very absurd».
Many centuries later, the story re-begins (isn’t art history in itself a story of re-beginnings?) in Paolo Bottarelli’s artistic practice. He is evidently fascinated by the world of mirror-images, and this aspect of his art shows him as a contemporary node in the timeless development of the specular figures. But there is more. Paolo Bottarelli is a contemporary artist, meaning with “contemporary” not only the fact that he is perfectly alive and kicking, but also the fact that he is interested in reflection. Again, meaning with “reflection” not only the physical process of light deviated by a reflecting surface, but also the mental process of the meditating pause preceding deep comprehension of a phenomenon. His works are not only images of which one could try and determine their more or less adequate “likeness” to the real object they depict (their more or less perfect mirror-nature): they are two images that stand each other in a mirror-relation. Facing my mirror-image when shaving early in the morning, I can reasonably ask which side of the mirror reality (the original model) is, which other side imagery (the derived figure) is. Looking at two of his works, this separation of real and iconic sphere is no longer possible, and I am caught in a mutual cross-reference witch switches off the safe anchorage to reality and spellbinds the spectator within the autoreferential iconic bubble.
The simple decision of redoubling the mirror-image transforms Paolo Bottarelli’s paintings in meta-paintings that oblige us to examine the ultimate nature of the mirroring itself, maturing our full awareness of the status and of the potentialities of the mirror-image. In doing so, Paolo Bottarelli decides to join a very prestigious and rich tradition of artists, philosophers and scientists who have found in the mirror-image an inexhaustible source for their research and work. Among the many artists, beside Alberti, we should mention a great master of mirrors like Leonardo, and all those Old Masters (like Raphael, Rembrandt and Rubens) who experienced the mirror-inversion of their works because of the transposition from the original drawing or painting to the etching or xylography or tapestry. Or those artists, in whose works the main distance marked by the pupil in opposition to the master was exactly the mirror-inversion of the image (like in Agostino Carracci’s and Domenichino’s Last Communion of Saint Jerome). Or, again, those artists and theorists, like Kandinsky in his Point and Line to Plane, who stressed the major metamorphosis of an image when mirror-inversed.
Everything changes in an image, if everything remains the same but the relationship “right-left”: syntax, semantics, symbolism, and pragmatics, all these levels are deeply affected by the reversal of laterality. Space is isotropic only in the abstract constructions of geometry and physics, but it immediately becomes highly anisotropic and dishomogeneous when we enter the world of real life. Philosophers like Kant and Cassirer knew it very well, and taught us the fundamental role played by left hand and right hand as conditions of possibility of orientation in the living body. Since Robert Hertz’s studies, cultural anthropology has been examining the infinite nuances assumed by the opposition right-left in the rituals and customs of the different cultures. And since Mac Dax’s and Paul Broca’s experiments, neurology has been investigating the fascinating world of different functions managed by the left and right cerebral hemispheres. A visionary talent like the chemist Louis Pasteur had imagined in 1848 a kind of anti-world, in which all the molecules are exactly the same like in our world, except for the fact that they are mirror-images of ours: L-molecules, becoming R-molecules (and vice versa) are structurally the same, but their different orientation implies different effects and properties of the substances they constitute. The world of Art is not exempted from such a scenario: inviting his works in a mirror-dialogue, Paolo Bottarelli offers us a stimulating occasion to grasp visually one of the most powerful couples of the universe directly at work. (A.Pinotti) 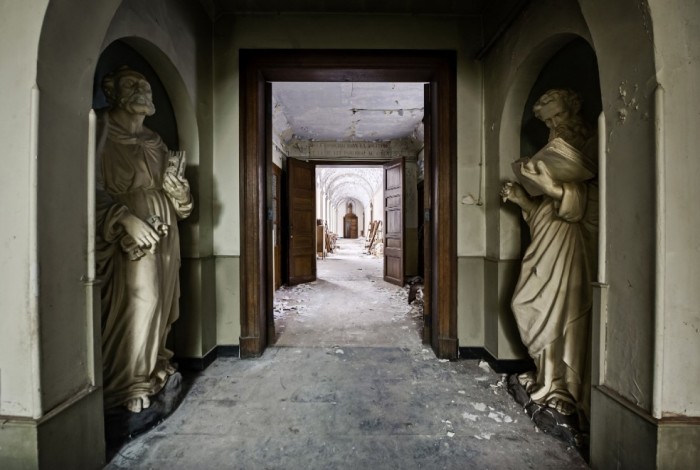